I’m here to be your guinea pig–your test subject–your informal travel experiment to discover the lay of the land!If the unknown is holding you back from traveling, I’m here to shine light on the dark questions of travel reality and show you some really amazing and cool tips, tricks, and hidden information you wish you could know along the way!

Travels Around the World

Have you watched Heath Ledger in A Knight’s Tale and thought, wouldn’t it be awesome to see jousting in real life? Well, jousting is one of the main events at the Ohio Renaissance Festival. And when I say main event, I don’t mean play acting. This is the real deal folks. Two guys in literal armor, on war horses, running full speed at each other with real lances, and taking real hits. Seriously, what more could you ask for?

Honestly, I’m not sure how I have lived in the great state of Ohio all of my life and have never attended the Ohio Renaissance Festival. The Festival comes annually from the beginning of September to the end of October in Waynesville, Ohio. I would see advertising appear and wonder what it would be like to attend, but would inevitably be too busy, or even, I’ll admit, a little worried it would be childish. Because yeah, dress up and role playing is great for kids, but would I feel immature going as an adult? It turns out that untrue stigma has caused me to unknowingly miss out for years on what would become one of my favorite trips!

A good friend and her husband invited Marc and myself to take a day trip down to the Renaissance Festival about an hour and a half south west of Columbus, Ohio. In true Marc fashion, I was persuaded into digging out our old Halloween costumes (we both went as Robin Hood), so we went in style. Upon arriving, I could see a huge field, hill, and large buildings. Immediately I was impressed. The infrastructure on this place is very well done. Once you pay and go through the gates, you enter the Festival. It is immediately like stepping into another world! Sure, the actors and characters were in full dress, but lots of the visitors were as well!

From the beginning, I realized something extremely important. I would have felt ridiculous at a mediocre, half-hearted attempt to create this world. It would have felt hokey. The Ohio Renaissance Festival does NOTHING half-hearted. Everyone from the workers, peddlers, and visitors were so invested in making this real, and build such a world, that it gives you permission to fall into the festival both feet forward. There is no judgement for having fun and immersing yourself back in time, because so is everyone else! So, if you, reader, get anything from this review, it’s to please not hold back from experiencing this because of concerns like mine, I was so wrong. This was fascinating and left no room for self-consciousness!

But, back to the good stuff that left me with a desire to attend every year going forward ….

We started by looking around at the peddler’s shops. There are a great many that range in price, from reasonable, to holy cow that is out of my price budget. From arrows to ink wells and clothing to potions everything you could imagine was there to be browsed.

There was an activity zone where you could try your hand at archery, knife throwing, and axe throwing, among other skills. You buy tickets and then certain activities cost so many tickets. I spent $20 and Marc and I got to do the axe throwing and archery. Neither one of us could hit even close to getting the axe to stick on the wall—let alone the target. It is WAY heavy and hard to keep it flying straight once you throw it. These were real axes! In terms of archery, it turns out Robin Hood might have been a better costume choice than I realized because I hit two bullseyes with no experience (totally not counting those two weeks in high school gym). Marc got on the target, but it turns out I’m the true archer among us! These activities are so fun—make sure to do these. 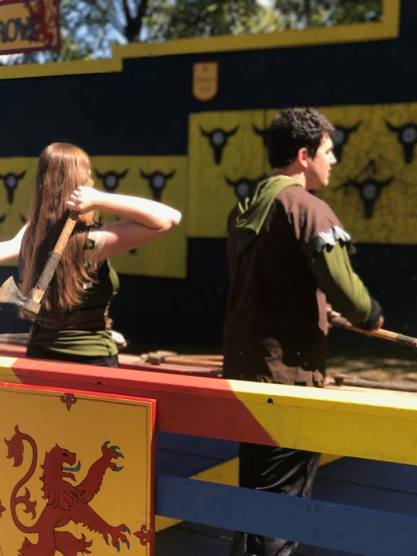 We attended the Mudde Show, one of many theatrical shows that was offered at the Festival. The festival offers nearly 100 shows daily on 14 stages so there are a lot of entertainment options in addition to the shopping and eating!

At the Mudde Show, they performed a rendition of Beowulf. Lots of kids in the audience, but a little risqué in the jokes department, so be prepared for that lol. We sat towards the middle of the wooden benches and luckily my friend has attended many times. Because it turns out at the Mud Show, they literally splash around in mud at certain points and you will get splattered with mud. And if you think you’re being smart by sitting all the way in the back? They sometimes walk around to get you there too. They sell t-shirts for a small amount of money, I think $2-$5 t-shirts as you depart the show (brilliant idea) and I especially noted that all of the little boys in the audience loved it. One poor mom with a baby was sitting in the front row and kept getting up and avoiding the splash and toward the end, she sat down (thinking it was over) and got doused with mud.

Luckily, we made it out of the show with nary a spec of dirt! If you do attend any of the theatrical performances make sure to have some small bills and cash on hand. The performers did an amazing job and do work off of tips. We were glad we thought to bring cash with us.

We had lunch at the Festival and prices weren’t as crazy as we were anticipating. It was about $10 per person for a meal and our selections were substantial. They even had whole turkey legs! The food vender stalls have awesome names such as the Pleasant Peasant, Rose & Crown, Fat Friar’s etc. Marc got the chicken bites and I got the chicken and waffles with mashed potatoes, which were sweet (literally sugary tasting)! It was a strangely delicious meal that I bewilderingly recommend. Make sure to stay hydrated, even in September-October it can get hot walking around.

Now, for the main event, we headed over to the jousting area when a spectacle overcame us. Turns out the knights and queen and entourage do a parade before heading over to the arena. That was awesome to watch (the war horses are seriously HUGE), but in retrospect, we should have got there 20 minutes beforehand because the bleachers and field were packed when we showed up. We got a pretty good spot for viewing, but next time, we’ll show up early for sure. 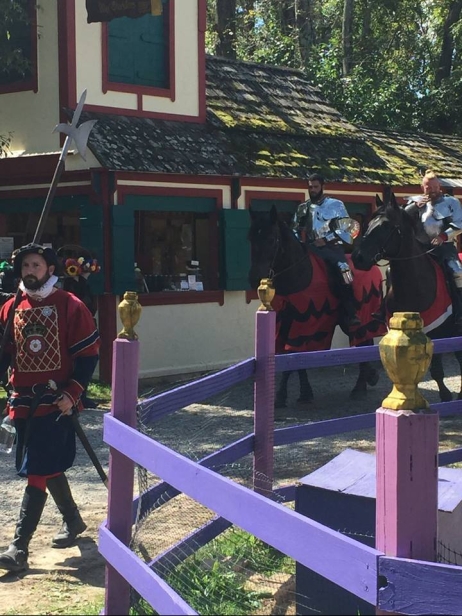 Like I mentioned earlier, the crier announcing the event was not lying when he explained that this was not playacting. There was a champion jouster (he goes around to various festivals, even in Europe!) and a rookie jouster in the competition. It turns out, A Knight’s Tale was pretty accurate because jousting is hard core! When you heard the lance hit the armor and crack it was violent. In the middle of the round, the rookie’s horse shied away a couple of times (it’s got to be intimidating for the horse) so they gave the horse a couple of practice runs and then came some more fascinating rounds. The Knights of Valour gave us wonderful sport!

The rookie was in the lead for points for a bit, but soon the champion came back and won. The rookie requested one last chance for a redemption and holy cow, it was basically the ending to A Knight’s Tale … in reverse. The champion jouster got a direct hit and literally unhorsed the rookie. This is not something you will see at every jousting because it is a real sport with variables, but it was incredible to see. This sport is not for the faint of heart and can be brutal to watch. The rookie eventually got up and seemed to be okay, but let’s face it, getting hit like that is comparable to getting into a car accident! It’s going to take a second to breathe!

Watching the jousting transported me to another place far in the past and was as grittily real as it can be. This was what I was most looking forward to, and I was awed.

We toured around some more after that and it was a hot day so, of course, we finished with some ice cream! It was one of the best ice creams I’ve ever had. We left in the late afternoon and drove home satisfied from an amazing day in a different world.

In terms of accessibility, there is a great deal of walking. It’s much larger in area than I had anticipated. The Renaissance Festival is handicapped accessible, but it’s important to note that the grass ground is bumpy and uneven and some of the path is gravel. Make sure to stay hydrated. Other than service animals, pets are not permitted at the Renaissance Festival. I give the park 4 stars out of 5 for accessibility.

Every weekend the festival has a different theme such as Time Travelers, Pirates, Romance, Highland, and this makes it even more fun. Lots of visitors participate so don’t hold back.

So, have you ever heard of or visited the Ohio Renaissance Festival? Any renaissance festival? Are there any fears, concerns, or questions of the unknown I didn’t cover? Comment below and let me know!

See my helpful trip tips below for more information! 😊

This place is out in the country so driving is a must. You have to pay to park, $2 per car.

You’ve gotta eat there! Lots of great options. I recommend the chicken and waffles! No outside food or beverage is permitted.

The weather can be unpredictable and it is largely outside. Dress appropriately for the weather and wear good athletic shoes! The ground was uneven at times, although most was a dirt or gravel path. Shrapnel from broken lances have the potential to hit spectators, so seat yourself accordingly.

US Dollar: Tickets could be purchased with credit or cash or pre-purchased through Groupon. Many peddlers accepted both credit and cash for payment, but some instances called for cash-only (like tipping performers!) so I would bring cash to cover the costs of the day.